Local governments bear a huge responsibility to both mitigate and adapt to the effects of climate change through the design of fair and equitable climate action solutions that reflect the severity of the problem but don’t leave vulnerable people behind. In order to learn where all of the candidates stand on this critically important topic, we have sent a short questionnaire to all candidates for Nanaimo mayor, Nanaimo city council, Regional District of Nanaimo and both SD68 (Nanaimo-Ladysmith) and SD69 (Qualicum) school board. Each of the questionnaires has five questions.

Responses will be posted here as we receive them. We have requested the responses by September 25th, 2022, the following documents are the responses in the order received up to now.

As a non-profit organization, the Nanaimo Climate Action Hub must remain non-partisan and as such we will not be ranking or endorsing any candidates. ​Climate Vote Nanaimo is a local organization of Nanaimo citizens interested in climate action who will be endorsing climate champion candidates.

We have created a one-page briefing paper to give the candidates some idea of what we're looking for from the next council. Have a look through it below.

The BC Greens Nanaimo Riding Association organized an all candidates town hall entitled "Toward a Sustainable Nanaimo." The event took place September 28th from 6-8:30pm at Beban Park Social Centre Lounge C. This town hall was focused on sustainability and environmental issues. We will post a recording if one becomes available. 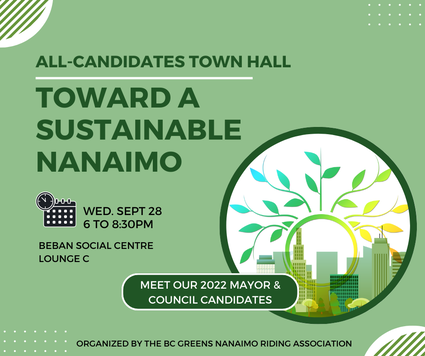